Department of Chemical and Biological Engineering
Institute of Bioprocess Engineering

Since June 2019, an unprecedented consortium has been dedicated to the health of vines in organic viticulture. Seven teaching and research institutes are working closely with three industry representatives, four organic growers’ associations and five organic wine growers. Special attention is given to downy mildew of grapevines, which is caused by the oomycete Plasmopara viticola. In organic viticulture, copper-containing plant protection products are mainly used to combat this highly virulent vine disease. These have been the subject of criticism for many years. Therefore, VITIFIT is looking for copper-reduced and copper-free control strategies.

Four project priorities (A to D) with a total of 20 work packages are being investigated within the framework of VITIFIT: 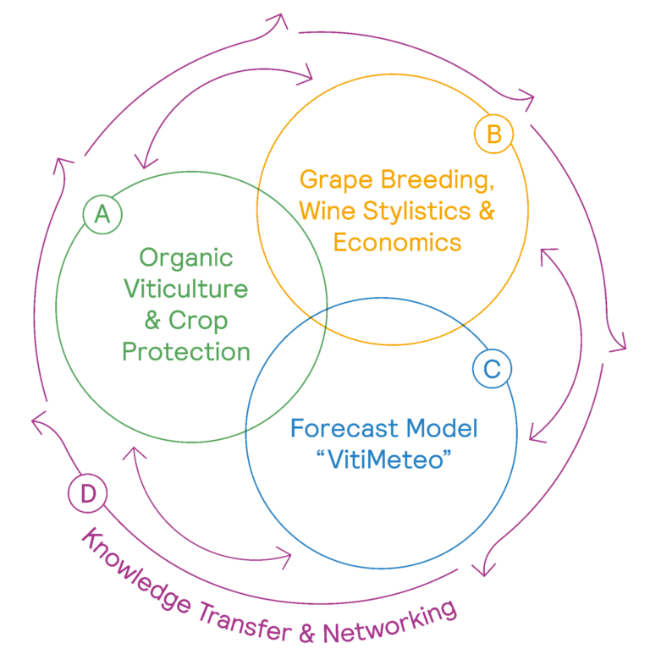 From FAU, the Institute of Bioprocess Engineering is involved with its Bioactives working group in topic A “Development and optimization of plant protection strategies against downy mildew in organic cultivation of established and new grape varieties” with its work package “Optimization of the efficacy of microencapsulated copper salts (CuCaps) for copper reduction”. Furthermore, microcapsules based on plant extracts are also produced in our working group.

The project is funded by Germany’s Federal Ministry of Food and Agriculture (BMEL) by decision of the German Bundestag within the framework of the Federal Program of Organic Farming and Other Forms of Sustainable Agriculture (BÖLN) with a total of 6.3 million Euros (funding code FAU: 2818OE037).