The dynamic kinetic resolution of racemates is a powerful method for the production of enantiopure compounds. However, it is not uncommon to face incompatibilities between the cleavage and racemization reactions. Kinetic resolutions are often catalyzed by lipases via selective acylation. Unfortunately, their combination with racemases often turns out to be critical, due to the fact that such acylations normally are run in organic solvents with low water activity. In such solvents most racemases are inactive making a spatial separation of the two reactions mandatory. 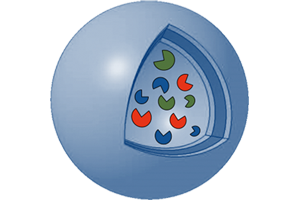 In this project we develop a new type of nano-scale enzyme membrane reactors for the dynamic kinetic resolutions in biphasic systems. To achieve this, polymer-based vesicles, so-called polymersomes, are used as nano-reactors with soluble enzymes encapsulated inside. To avoid disintegration by the organic solvents in the biphasic systems, the membranes of the polymersomes have to be stabilized. Additionally, the selective mass transport over the membrane has to be facilitated via  the insertion of appropriate channel proteins. After the establishment of the complete nano-reactor-based biphasic reaction system, the resulting synthesis will be thoroughly characterized and a model-supported optimization will be performed.